iPhoto for the PC

Anyone who is a Mac user will be familiar with iPhoto (unless they are a die-hard OS 9 user and have yet to taste the delights of OS X). Its a fantastic program and I love just playing around in it... a great way to while away an idle moment. Its great for showing fancy slideshows with music and Ken Burns effects to family and friends, especially on my 17" iMac (G4) screen.... beats the old photo album any day! If I could afford one I'd upgrade to the new iMac with its Front Row, it justs gets better.

Well, if you haven't yet switched from the pc to a Mac and you doubt you ever will, perhaps Steve Jobs has something in store for you. I'm talking about iPhoto (indeed the whole shooting match of iLife apps... yes GarageBand too). I'm thinking that he has something up his sleeve to go with the switch to Intel chips in Macs come summer 2006 (if not before). I see no reason why Apple hasn't secretly been developing iLife for the PC. After all, they've been getting ready for Intel ever since OS X came out and technically (all you tech heads correct me if I'm wrong) I see no major hurdles to making it so. Indeed, I reckon he's keeping it close to his chest but I believe Apple will switch to more of a software company in the near future (2007 by the latest) and make its OS available on hardware other than its own..... not all hardware mind you. I reckon it will start off with making Intel motherboards certified to run OS X, some 12 months or so after the switch to Intel in regular Macs.

Why do I believe all this, you might well ask. Well, for one thing it makes sense to me. If Apple is going to be in bed with Intel, I reckon it will be in a big way and what better way to boost both Apple and Intel's revenue streams than certified motherboards that will run OS X and if you so choose, Windows and Linux. Also, Jobs is a lateral thinker and Apple would be dead in the water if it wasn't for his radical ideas. Jobs wants to rule the world, at least as far as technology goes. He's got 75% of the MP3 player market, who seriously believes he doesn't want 75% of the desktop and enterprise market. The latter is becoming ever more important for Apple with XSan etc. 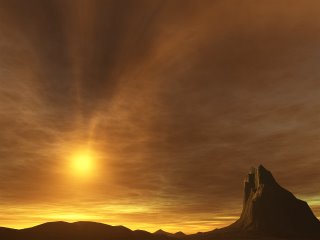 'In the beginning' seems somewhat pretentious I know but I wasn't feeling very creative!

What on earth will I write about then; I guess we will have to see how things develop. Which brings me to digital photography (the very idea of digital being to get away from all that messy, expensive, slow and downright hazardous developing with chemicals.... I definately don't miss those long hours in the darkroom going blind and half-crazy with the fumes!). Photography has been one of my true loves (perhaps my very first since I got beyond that stage of childhood where everything in the universe is part of you) from a very early age.

I had my first camera around the age of 7, I know this as it was on a family holiday and I was 8 when my mum gave my dad the royal order of the boot.... ergo, it must have been some time before. We were on a holiday camp and I won the camera from a sort of slot machine. It was made of plastic, a fore-runner of our modern disposable cameras, but it took real photographs and I had them developed. Sadly they no longer exist to my knowledge and I have no recollection of what they were of.

That was the beginning of a life-long love affair and since then I have owned a long list of various cameras. My current one is a Fuji 602Z digital which has proved to be a good buy for most purposes. Like many early digital cameras it is slow to start up and takes a while to write to the memory card. One day I will upgrade my bog standard 64MB CF card to a pro version of higher capacity now that prices have dropped like a brick from a great height and speeds have increased.

Well, if you are interested in viewing any of my images I will be posting them to my .mac account. I have coughed up the £70 or so that Apple now charge and decided to give it a go for a year and see if its worth the money. I will be posting the url soon. Til then, take care and if photography is also your love, happy 'snapping'. You can also visit my existing site at the link on the right.