OFFER EXPIRES SOON! Get Skylum 2018 at a discount (and claim extra discount with code). 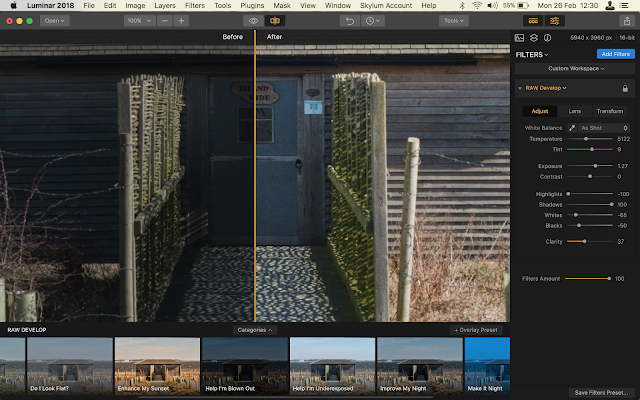 Skylum's offer on Luminar 2018 expires soon (The offer expires at 11 a.m GMT, February 27th) so you need to hurry to get it at a special price.

Use this link: Luminar 2018 Deal and use the discount code NEWBELTANE to get even more off.

I have recently been using Luminar 2018 to edit some RAW images taken on my Fuji X-T2. I went with a friend to Essex Wildlife Trust’s Nature Reserve with the intention of taking some wildlife images. We arrived at the hides to find the wind was almost gale force and it was a very cold day. The combination of wind and temperature had persuaded the wildlife to stay somewhere more sheltered. So, we retreated to the visitor centre for a hot drink and some home-made cake in an effort to warm up.

I did take some images of the hide and the reservoir before heading for shelter. We also managed to get some images of small birds using the feeders by the visitor's centre before we went inside.

The RAW DEVELOP mode of Luminar 2018 helps to get the best out of your RAW images before exporting as Jpegs or PNGs. At the top of this post you can see a screenshot of an image opened in Luminar 2018 and some RAW presets loaded at the bottom of the workspace. Here are some further screenshots: 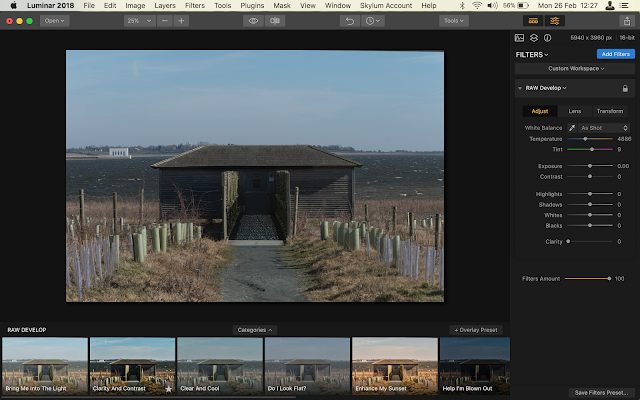 The screenshot above is without any changes made to the image. I merely opened it in Luminar but without any of the presets or other filters applied. 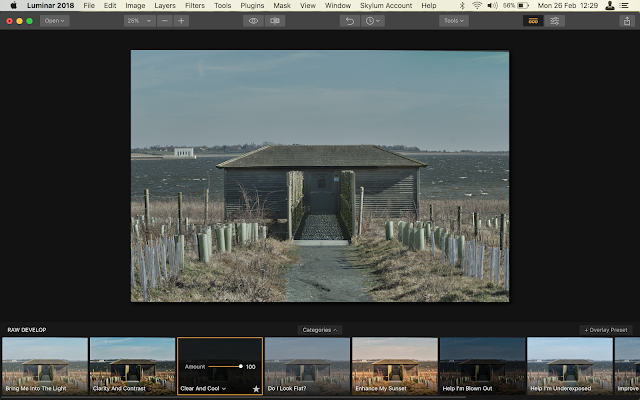 In this screenshot you can see I have applied a preset (Clear and Cold) to the image. The preset has given the image a cooler appearance. 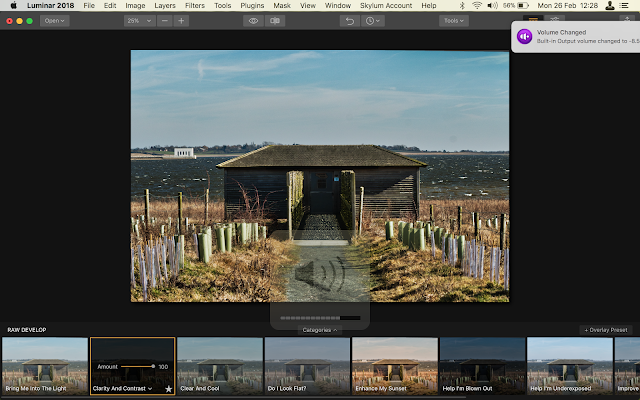 In this screenshot you can the result of applying the Clarity and Contrast preset. Presets make it easy to add various filters all at once and you can download this set of RAW Develop Presets from here: Raw Develop Presets. BTW the presets are free.

I will be posting a walkthrough in the near future of editing an image from start to finish so be sure to bookmark my blog and don't forget to catch the special deal and extra bonus (using the links can discount code above).

Is it possible to take photos in almost pitch dark? Don't forget to get Luminar 2018 at special price! 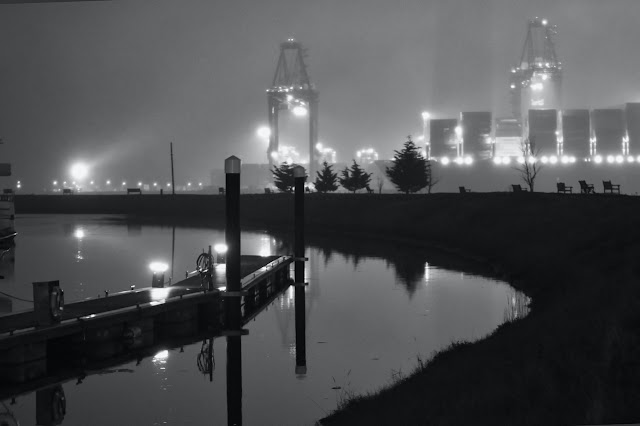 One of benefits of digital photography is that the technology behind it is always moving forward. Much faster than the technology behind film emulsions ever was. In the area of sensors this is particularly true and it means that as image makers (both of photographs and video) we get tools that are more and more powerful with each passing year. Not that it's all about the technology (at least not yet buy Artificial Intelligence will be a real game-changer; we just don't precisely how) - you still need some skills to create great images.

However, improvements in sensor technology over the years have brought us the ability to create images in really very low-light. In fact, in what appears to us as almost total darkness, the best of digital cameras can capture enough light to reveal details that we didn't see at the time.

Cameras as a whole have seen great strides in this area but some more than others. The Sony A7 series has earned itself many a plaudit for it's low light performance. Other brands are also pushing the boundaries ever further. My own experience is that what is now possible is something that just a few years ago seemed impossible. It wasn't that long ago that you wouldn't want to shoot anything that required an ISO of greater than 800. Now its expected that digital cameras should exhibit little if any noise at ISO 1600.

If you look at some of the pro cameras from each of the main brands and examine their recommended ISO ranges you will find the following:

This shows that cameras today are much more capable than their predecessors when it comes to low light images. The upper limits of these figures mean that what appears as virtually pitch dark to the naked eye can still be captured, albeit it with a very high ISO setting and the presence of image noise.

The real question is how usable are these settings and is the image noise something we can manage sufficiently so that it doesn't degrade the final image significantly? Well, I am not fortunate enough to have access to any of these cameras to field test them but there are many sites online that you can read in-depth reviews on each of them, including tests of their low light performance and how they deal with image noise.

I do, however, own a Fujifilm X-T2 and so it was that I decided to try some low-light photography. Normally, the only low light photography is get close to is after the sun has set but whilst there is still some light in the sky. This would be the first time I had tried taking images well after sunset in the dark.

A friend of mine has just purchased a Canon D750 so we agreed to meet up and decided that he lives in Ipswich and I live in Colchester, that we would try and get some images of Felixstowe Container Port and Harwich International Port at night. Checking Google maps we choose Shotley Marina as a good starting place. Thought it was overcast and raining we didn't really mind as we wanted to get shots of the lights reflected in the water. We hoped that we would manage to get some shots of a container ship and a ferry.

On arrival we decided that we would eat first and so had a meal at the Shipwreck Pub, Bar & Restaurant, located at the marina. I can heartily recommend the service the ambience and the quality of the food if you ever find yourself there.

Once we had set up our cameras on their tripods we started taking images. I was using my Fuji X-T2 with FUJINON LENS XF50-140mm F2.8 R LM OIS WR and the FUJINON TELECONVERTER XF1.4X TC WR.

Here is an image without any editing other than exporting from Luminar 2018 as a jpeg (I shot in RAW). 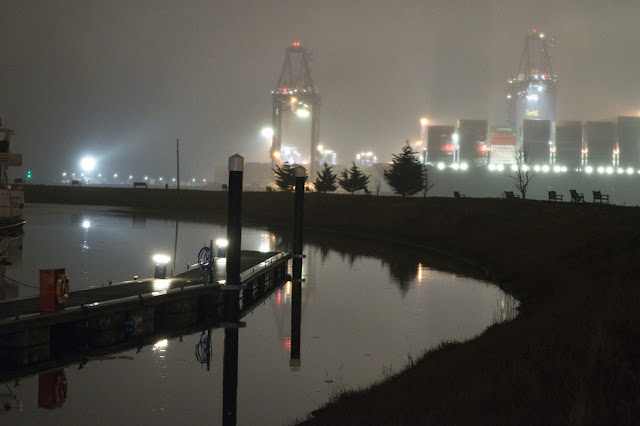 As you can see there are some issues with the image. Both colour and luminance noise is visible in both the shadows and the sky, the horizon is not quite level and the highlights are somewhat blown.

I then played around with the original RAW file in Luminar 2018. Here are some screenshots:

Here is the resulting image: 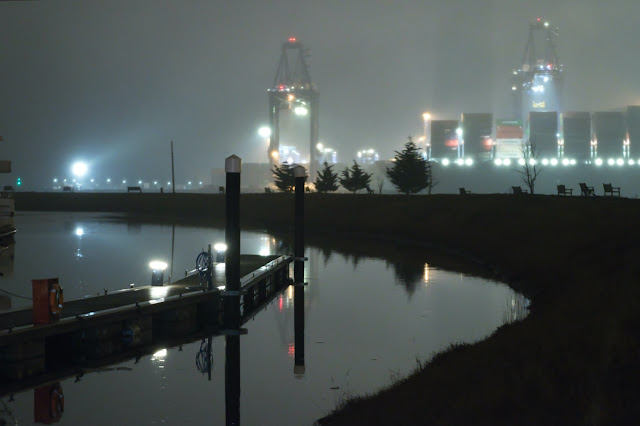 I am not saying this is a great image, though I do like it and feel it is a nice image, especially considering that the actual scene was very dark to the naked eye, due in no part to how our eyes and brain work together when looking at this type of image.

However, when you consider that I shot at ISO 12,800 I think you will agree that on the whole the noise is reigned in sufficiently for it to be a perfe to ectly usable image. I would love to print this out at A3 but sadly, I don't have a printer capable of producing quality prints at that size.

REMEMBER: Use the discount code NEWBELTANE to get an extra discount off!

A dog is for life. Memories of a beloved rescue greyhound, Petal. 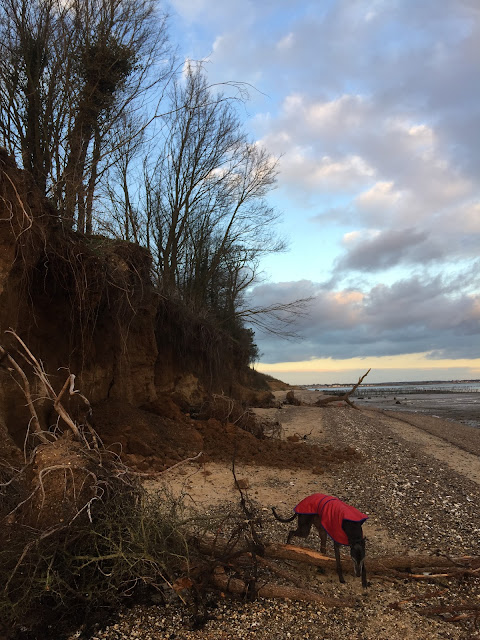 I was browsing images on my phone and came across this one of Petal, our recently deceased rescue greyhound. We had her for over 9 years from when she was aged 4. She was a rescue greyhound, which for those who don't know what this is, I will briefly explain. In the UK and Ireland it was once very popular to go to the dog races and bet on greyhounds racing around a track after a 'rabbit' (not an actual one, just one to get the dogs hunting instincts going).

However, over the last few decades, the popularity of greyhound racing has declined to the point that there an awful lot of retired greyhounds. Most were finished as racing dogs after 4 years or so and many were then euthanised. It is difficult to know for sure what happens to every greyhound that is retired or not fit for racing any more. Thousands are rehomed by charities (which is where we got Petal) but the League Against Cruel Sports estimates that around a thousand 'disappear' every year. Some are sold to research labs but it's thought many are simply euthanised despite being perfectly healthy.

Greyhounds make great pets, have wonderful personalities and are very affectionate! We have lots of happy memories of our beloved greyhound Petal and miss her greatly. Sadly, she developed a chronic condition that required every increasing doses of pain-killers. In the end it wasn't fair on her to put her through any more pain and discomfort. She was euthanised at home with her family beside her and although it was terribly sad to say goodbye, we know we did the best for her.

As I said, we have lots of happy memories of her time with us and the photo above is of her on the beach at Mersea Island. She loved the beach and exploring nooks and crannies, as well as running into the surf! It was a pretty cold day so she had her fleece on to help keep her warm.

How to get Luminar 2018 for a special price and get your DISCOUNT CODE for even more off!. 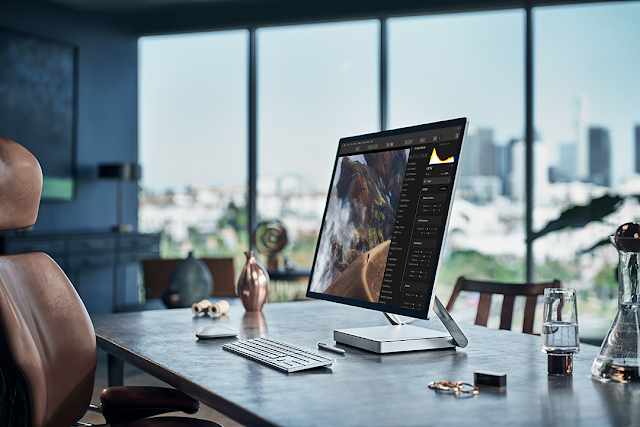 Skylum (formerly Macphun) have not only released an update of their Aurora HDR 2018 (and on offer too, until 26th Feb), but they have similarly released updates to their Luminar 2018 software (again with bug fixes and updates).

Until the 26th Feb you can get the software at a special price. Here are the details:

BTW: You can use the same discount code (NEWBELTANE) if buying Aurora HDR 2018 too! 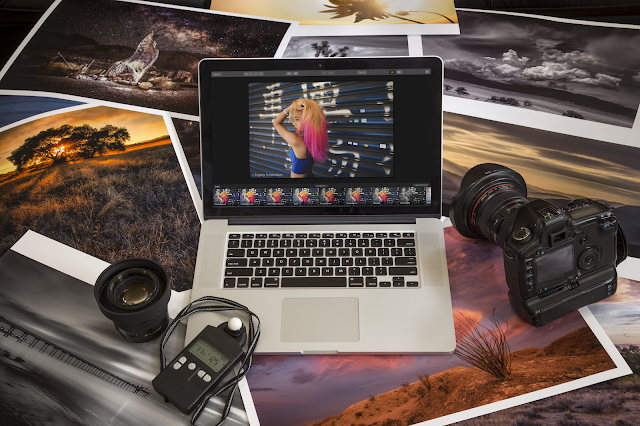 The most high performance camera in Fuji's X-Series range. 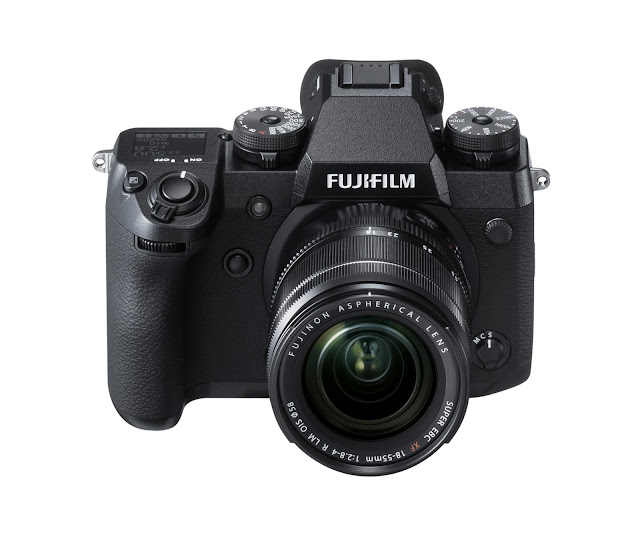 Fuji has announced today their latest addition to their X-Series range of mirrorless digital cameras. The Fujifilm X-H1 combines a robust, durable body with superior image quality and easy operation and is the first camera in the series to include 5-axis 5.5 stops in-body image stabilisation (IBIS), and the new Eterna Film Simulation feature, for outstanding video reproduction.

The X-H1 is compatible with the Fujifilm X-Series of lenses and Fuji will be introducing new lenses to the range, including the MKX18-55mmT2.9 and MKX50-135mm T2.9 professional cinema lenses which incorporate the X Mount (scheduled for release in May 2018), the XF200mmF2 R LM OIS WR, a wide aperture single-focus telephoto lens, and XF8-16mmF 2.8 R WR, designed to meet the needs of scenery or landscape photographers, both of which are scheduled for release by the end of 2018. The new camera and lens combinations will provide outstanding image production and will be ideal for fast action sports photography.
Features: 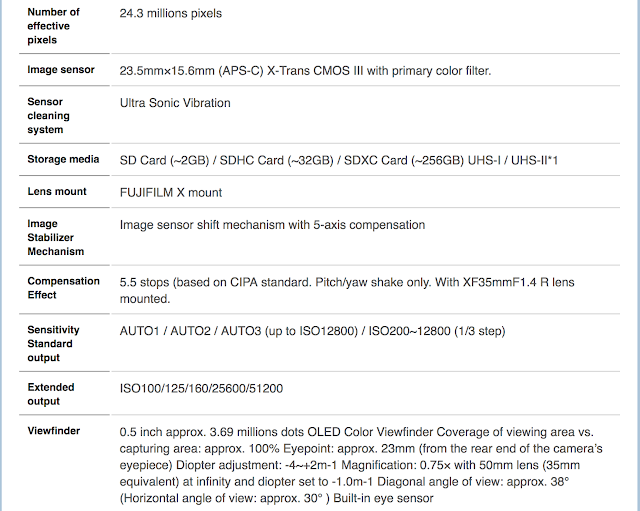 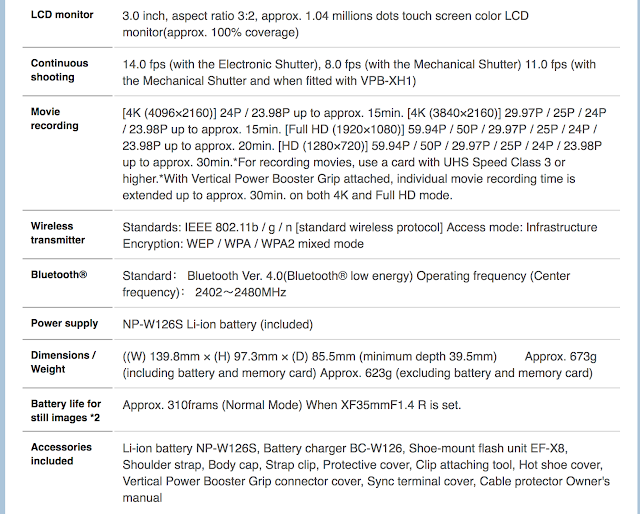 You can read a more detailed press release on the Fujifilm website here.
at February 15, 2018 No comments:

How get yourself Aurora HDR 2018 for a special price and SAVE EVEN MORE MONEY with my DISCOUNT CODE! 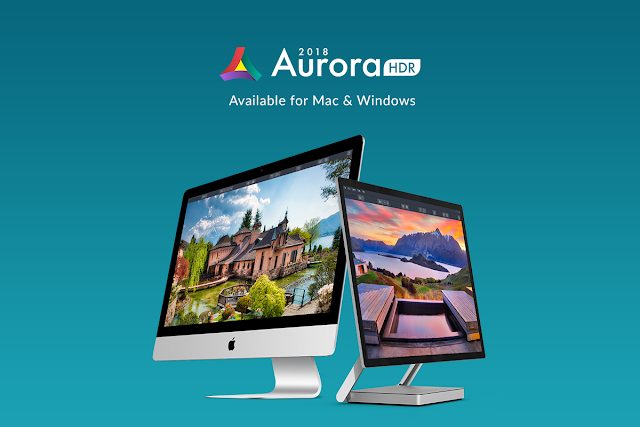 Macphun, the creators of software for the Mac such as Aurora HDR, is now Skylum. The change of name reflects the fact that they now create both mac and Windows versions of their software.

They have also released updates this month for both mac and Windows versions of their Aurora HDR 2018 software. Below you can find the list of fixes and updates.


Currently, there is a great offer available on Aurora HDR 2018:

To benefit from this offer visit this link. Remember to use the special Discount Code NEWBELTANE for even more money off both Aurora HDR 2018 and Luminar 2018. The special price ends 26th Feb so hurry!