How to take fantastic colour images with Fuji Film Simulations

One of the great attractions of going with Fuji cameras such as the Fuji X-T2, is the built-in Film Simulations. Fuji was well-known for its fantastic film emulsions for reversal (slide), colour negative and black and white. In all, Fuji provides 15 film simulations ( 6 color, 1 Sepia simulation, and 2 Black and White simulations with 3 additional ‘filter’ versions for each of them - that is, green filter, yellow filter and red filter - very reminiscent of when we used to keeping changing lens filters, depending on whether we wanted to have really dark skies!).

Here is a breakdown of the film emulsions currently available in the UK from Fuji (with those available as film simulations on Fuji X-series cameras in bold):

You can read more about each film stock (that is actual film emulsions, rather than the film simulation modes) on Fuji's site here. You can also read in more depth about all their film simulations on their dedicated X-System site here.

Below is a graphic that Fuji have created, showing where each of their film simulations lie in terms of tonality and saturation. It should prove very helpful when considering which film simulation to sue in any particular scenario. 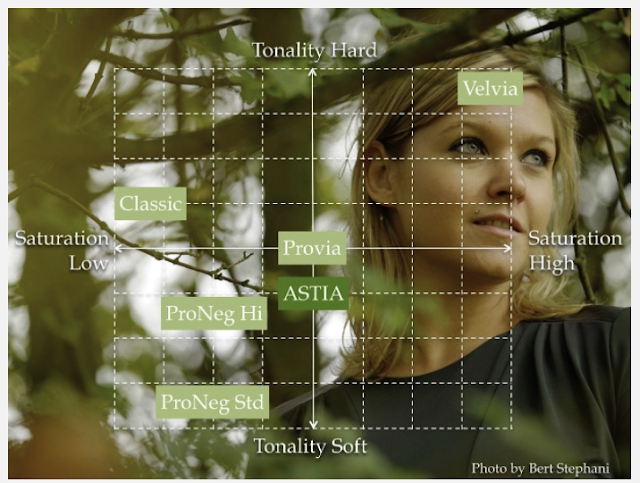 This is just what I did. I was sitting outside a cafe in Harrogate, Yorkshire recently and just took the shot with this little project in mind. At first, I was thinking of taking several images with the film simulation applied when I took the shot. However, I realised that it was simpler to take just one shot and then create copies later in camera and apply the film simulations then. Such a time-saver. Thank you Fuji!

VELVIA is the most saturated of the images, which isn't surprising when we examine where it lies on the chart! This is why it's great for landscapes on a dull day, when you need a boost to the saturation and tones in your image.

I have barely scratched the surface about what Fuji film simulations can mean for your photography. I have only covered the colour ones for now, but will cover the black and white ones in another post soon. I will also find some more examples of each of the colour ones 'in action' so to speak.

Also, as well as film simulations, Fuji has a host of other settings that can alter how your final image looks. We will also, look at these in more depth in a subsequent post. For now, thank you for reading and do leave your comments below.

Please leave your comments. I reserve the right to delete racist, abusive, pornographic and other distasteful posts without warning.