I found myself in need of a printer urgently today. I had an important business letter to print and hand-deliver and my Epson Photo Stylus 950 ran out of cyan ink. If you know Epson inkjet printers, you'll know that they refuse to print if one cartridge is empty. As I had no spare cartridge (light cyan but not cyan!) I needed one urgently. Trouble is, you cannot buy a genuine one for this particular printer for love nor money, at least not from a bricks and mortar business. Only online. But I needed it now and no-one delivers (yet) in 4 hours if you order online.

So, I could save the document to a USB drive, nip out to a friends to print it out or I could buy a new printer. Now, before you think I am a rich person with more money than sense, let me say in my defence that I print a lot of documents and my previous laser had died on me. Lasers are cheaper than inkjets go as far as running costs are concerned, especially if you buy toner online. So, it was off to PC World and Staples to see if I could buy a cheap mono laser just 2 shopping days before Christmas.
In the end I bought a colour laser. Surely this was extravagent? Not really, as I managed to buy one for £100... yes you heard me, £100. Staples had a Konica Minolta 2400W for £149.00. I asked if it was available to take away and the young assistant said he would ask. Turned out that the answer was yes, but there was a problem. They couldn't find any leads, discs or even a box for it. Did I still want it? As I was musing this over, they said it would be reduced as a result of the missing items. I asked how much and the assistant had to ask the manager. Back came the word, I could have it for £100! Now, I was prepared to pay £125, so of course I bit their hands off there and then!

Now, if you have read my blog before, you will know I am a Mac user and you may also know that this particular printer is Windows only. Now Samsung (my previous now dead laser was a Samsung), say their printer (I am referring to the CPL 500 series) is Windows only, BUT, if you do a search on their site, you will eventually find some Mac drivers and they work fine. Minolta however are adament, strictly Windows only. Oops, you say, I made a blunder. No, I can say with a certain amount of smugness, as I know that there are a host of generous-hearted folk out there writing drivers for all sorts of printers for the Linux and Mac platforms. Hurrah for the open-source community. So it was that in minutes of arriving home I had the printer plugged in, drivers installed and was clicking print within minutes.

However, all did not go according to plan, as the output was smudgy and faint in parts. No problem, take out the toner, give it a shake and put it back. Still no joy. In the end, I managed to get one page out of ten to print OK, so off I set with just 10 minutes to spare and hand deliver an important letter for a client. Phew! After that, I decided to buy some black toner, just in case the toner (only a starter one with a measley 1500 capacity) was low. When I installed it I still had poor printoputs. In the end I solved the problem.

Here is my hint for others:
Hint: Make sure that before use, you check the fuser separator levers are DOWN. They are raised when a printer is stored or not used for a long time. I made the assumption that as the store might have printed out samples they would be down but in fact they we up and hence my printouts were rubbish. Once I had put the levers down my prtintouts were great. Lesson learned.
Now, if anyone else finds they have or are thinking of buying a printer that is advertised as Windows only and they need Linux or Mac drivers, then check the internet. For Minolta 2000 series printers, check here : sourceforge.net 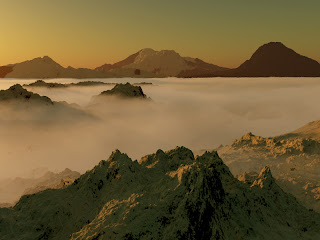 This is my latest render in TG2. I am gradually getting to grips with the interface and the myriad of options available oin this new version of Terragen. It is much more sophisticated and I am sure that I am only just scratching the surface of what is possible.

Keep checking out my blog or my galleries for more updates in the near future.

Actually, its the same render as the first but tweaked in iPhoto. Quite like it as it looks like its a different time of day.

Here is my first decent render with the new TG2 (Terrgen 2 Preview).

The long-awaited update to Terragen is now available for download....

Terragen 2 (TG2) is now the primary development focus of Planetside Software. TG2 is a complete rewrite of Terragen from scratch, and is a significant advance beyond the capabilities of Terragen v0.9. Apart from being a much more powerful renderer, TG2 has a much more flexible architecture which will allow development to proceed at a considerably greater pace.

Terragen 2 features the following as part of its core architecture :

CNET colleague James Kim found deceased by ZDNet's Dan Farber -- Many of you have been following the search for our CNET colleague James Kim. After the good news that his wife and two children were found in good condition, James' body was found today in a remote part of Oregon wilderness, where he had been missing for 11 days. James covered digital audio for CNET.com [...]
at December 07, 2006 No comments: